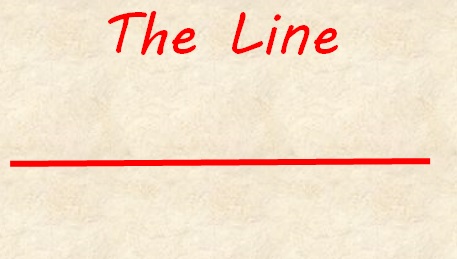 The line exists for everyone. It is the line of choice. It’s called that because you can choose whether you operate above the line or below the line. Nobody forces you to do either – it is your choice. Sometimes the line can seem a bit fuzzy. Sometimes it can be hard to find. But it is there.

Many business owners operate below the line. When something goes wrong in their business they look for someone to blame. It’s all the government red tape. It’s the unfair advantage that big companies have with their marketing budget. They undercut me to ‘buy’ the business. I’m sure you’ve heard plenty such rants at networking events. They make excuses for why they didn’t win the business, why they didn’t get the marketing campaign out, why they didn’t make those calls. They cite the reasons why it happened. Well reasons are just another way of describing excuses. They then go into denial – it wasn’t their fault, they couldn’t do anything about it.

Tiresome isn’t it. Well with their Blame, Excuses and Denial, they have made their BED and can lie in it. Me? I want to move on and deal with things, not lie around and moan. How about you?

Successful business owners operate above the line. They recognise they have a choice, They know they can control their reaction to events and they do so. They take ownership of the situation. They will own the problem, not be owned or defined by it. They accept accountability for dealing with it. It is their responsibility. They accept the challenge and rise to it. By taking Ownership, Accountability and Responsibility they have a powerful OAR – one they can use to steer in any direction they need to to resolve the problem and power onwards from it.

Successful business owners use their OAR to empower themselves, to liberate them from the negativity of operating below the line. In adversity they look for opportunity.

All of us have bad days. Days when nothing seems to go right. And so we dip below the line. We have a rant at the faceless bureaucrats, the weather, the air traffic controllers. I say that because I’m writing this on a delayed flight. In fact I’m on a later flight than planned because mine was cancelled and the replacement was delayed. My reaction was frustration and annoyance – it was everyone else’s fault. But my reaction was pointless – I couldn’t do anything about the flight delays. I was below the line.

I recognised my behaviour and chose to come back above the line. Let’s use the time positively by writing this blog and even using the situation as an example. I chose how to react, how to deal with the situation and how to turn it into a positive.

So it’s OK to dip below the line occasionally – it can even be cathartic – so long as you recognise it and move swiftly back above the line.

A friend of a friend has a large pebble with a line scratched across it. He’s divorced so only sees his young son on set days. He explained the line to his son so they could both try and operate above the line and get the most out of their limited time together. The deal is that if one of them drops below the line, rather than debate or argue about it, the other party can put the pebble under the offending party’s pillow. So when they went to bed they would get a reminder they had dipped below the line. And because they slept on it they could have a calm discussion the following morning about what they had done. I think that’s a great way to diffuse potential arguments and teach your son about taking ownership, accountability and responsibility.

Do you operate above the line?